Read the following passage taken from the book Caps for Sale by Esphyr Slobodkina: 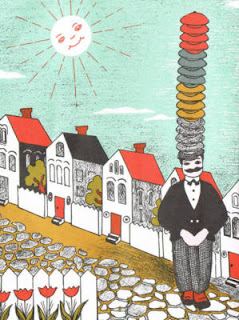 Once there was a peddler who sold caps. But he was not like an ordinary peddler carrying his wares on his back. He carried them on top of his head.

First he had on his own checked cap,

then a bunch of gray caps,

then a bunch of brown caps,

then a bunch of blue caps,

and on the very top a bunch of red caps.

He walked up and down the streets, holding himself very straight so as not to upset his caps. As he went along he called,


In the above passage, what does the word "upset" mean?


a. tip over
b. make someone sad or irritated
c. to stand straight up
d. to move fast


Scroll down for the answer.

b. is incorrect - you didn't read, did you?  Whenever the EOC asks you what a word means and it seems to be an easy word - watch out.  Many easy words have multiple meanings.

Who in their right mind would want a daily dose of EOC? The purpose of this blog is to provide a daily warm up practice for English II students in NC. Use this how you see fit! If you have any questions to add to the mix or comments to make, do so on the forum. The link is on the link list below.

What do the colors mean?

For the answer choices, I typically put the correct answer in blue. The next best answer might be in green. That means you are on the right track, just a little off. Black means that the answer is wrong. Red would be the way off wrong answer.

Judge yourself by how you move up the color chart on your answers.