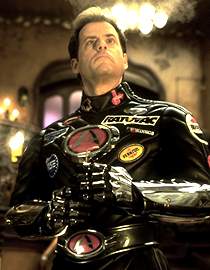 In the highlighted line above, what is the most likely reason the word "is" is set off by / / ?

a. to separate the names "Lance Hunt" from "Captain Amazing"
b. it was an error in the script writer's draft that was later fixed by the editor
c. to show that this word isn't said aloud
d. to insure the actor emphasizes that word more

Scroll down for the answer.

d. is the correct answer.  Remember that the script  author's purpose is to get the actor to read his/her lines correctly.

Who in their right mind would want a daily dose of EOC? The purpose of this blog is to provide a daily warm up practice for English II students in NC. Use this how you see fit! If you have any questions to add to the mix or comments to make, do so on the forum. The link is on the link list below.

What do the colors mean?

For the answer choices, I typically put the correct answer in blue. The next best answer might be in green. That means you are on the right track, just a little off. Black means that the answer is wrong. Red would be the way off wrong answer.

Judge yourself by how you move up the color chart on your answers.